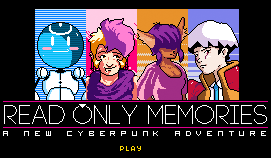 Read Only Memories is a cyberpunk adventure game focused on the dark side of technology in the year 2064. It is directed by John "JJSignal" James and produced by MidBoss and Matt Conn for OS X, Linux and Windows. The game has also been announced for release on PlayStation 4, Play Station Vita, Xbox One, Nintendo Switch, iOS, the Razer Forge and Android, and launched on October 6, 2015.

The game follows the story of a young journalist working to find a missing friend, led by the first sapient ROM, Turing.

The free "Read Only Memories EX" DLC was released on January 22, 2016 and adds a Playable Epilogue chapter that is accessible after obtaining Ending 1.

IDW published a Read Only Memories Comic Book series in 2019 to 2020, centering on Lexi's new private agency in Santa Cruz.

, centering around the conflict between the gifted esper, ES88, and the rough, telepathic criminal, the Goldern Butterfly, is set for release in 2022.