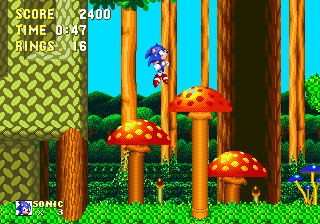 You're a character in a video game, and you need to climb up a cliff. But unfortunately, you have no climbing skills whatsoever. You have no trampolines, jetpacks, or flying animals. So what do you do? Easy, just go find a large mushroom!

In short, mushrooms in video games which can be used as trampolines and springboards.

May overlap with Fungus Humongous.