Literature / The Tale of the Exile 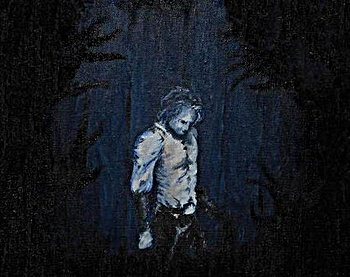 It was supposed to be a simple job.

It was supposed to be a simple job.

Get in, get the goods, retire rich. Simple, right? Then my idiot partner screws things up. I mean, what kind of thief brings a lit candle on a burglary? When I blew it out, he screamed as if I'd stabbed him, and suddenly I'm on trial for attempted murder! Why are the people of Miir so afraid of the dark, anyway?

But I found a loophole in a punishment called "Exile." For one week I get turned out on the streets after dark, alone and unarmed, and have to fend for myself. That doesn't seem too hard. In a week I'll pick this place clean!

Oh, sure, there's supposed to be some sort of "Shadows" who will make my life miserable. There's rumors of goblins hunting the alleys, streets that don't lead the same place twice, spirits who possess the dead, decadent nobles who play with people's lives for sport, a circus that transforms men into monsters, and worse. I'm told the last Exile was found with his eyes gouged out and strange writing in blood on the walls around his corpse.

But you expect to hear that kind of stuff in a city as superstitious as Miir. Really, it's only a week.

How bad could it be?

by TV Trope's own The Stray. Also collected here