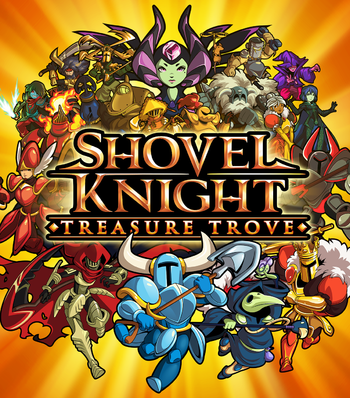 JUSTICE IN SPADES!
"Long ago, the lands were untamed, and roamed by legendary adventurers!"
Advertisement:

Shovel Knight is a 2D platformer developed and published by Yacht Club Games. Featuring a Retraux 8-bit graphical style and inspired by the likes of Mega Man, DuckTales, Castlevania, and Dark Souls, Shovel Knight is a game that seeks to pay homage to the 8-bit era, while also... ahem, digging out its own place in the Video Game landscape.

The story goes that our eponymous hero was once part of a legendary adventuring duo with his partner, Shield Knight. During their travels, Shovel Knight and Shield Knight visit the mysterious Tower of Fate. After they encounter a cursed amulet within the tower, Shovel Knight loses consciousness, eventually waking up outside the (now sealed) tower — alone. His spirit broken after losing his best friend and ally, Shovel Knight retires from adventuring and resigns himself to a life of solitude. Unbeknownst to Shovel Knight, however, his self-imposed exile has left the land without champions, making it ripe for conquering by the evil Enchantress and the eight dastardly knights of her Order of No Quarter. Discovering one day that the Tower of Fate has been unsealed, Shovel Knight realizes that only he can defeat the villains wreaking havoc on the land. Setting off with his trusty Shovel Blade, Shovel Knight must fight his way through The Order of No Quarter and their minions, reach the lair of the Enchantress, and dispense justice in spades once and for all!

Advertisement:
Publishing/Update History
The game was released on June 26, 2014 for the Wii U, Nintendo 3DS, and all PC OSes on Steam (Windows, Mac, and Linux). However, thanks to the (very) successful kickstarter, several free expansions featuring members of the Order of No Quarter were made for the game. The first of these, Plague of Shadows, was released on September 17th, 2015, starring Plague Knight in a story parallel to Shovel Knight's as he turns traitor on the Order in order to harness their essence in pursuit of an ultimate potion. The second expansion, Specter of Torment, is a prequel that follows Specter Knight as he recruits the Order of No Quarter, released in Spring 2017 (March 3 for the Nintendo Switch and April for other platforms). King of Cards, the third and final expansion was released on December 10th, 2019 and is another prequel that features King Knight rise to power and first member of the Order Of No Quarter, and a four-player Battle Mode known as Shovel Knight Showdown was released on the same day for non-portable formats.

During the PlayStation Experience event, it was announced that Shovel Knight will be ported over

to the PlayStation 3, 4, and Vita, with the addition of a new Super Boss for Shovel Knight only: Kratos from the God of War series. During GDC 2015, it was announced that Shovel Knight will also be ported to the Xbox One, and Zitz, Pimple, and Rash from Battletoads will be featured as bonus bosses for Shovel Knight's story only.

, it was announced that the update featuring Specter of Torment would also rebrand the game's original format with all the expansions included as Shovel Knight: Treasure Trove, and that the game will be ported to the Nintendo Switch. In turn, all four of the game's campaigns and the Battle Mode will be available for standalone purchase for those who don't want to pay for the entire collection. Additionally, the update would include the long-promised Body Swap Mode that reverses everyone's gender, and co-op multiplayer for every version of the original game (now named Shovel of Hope) but the 3DS and Vita. A followup post on February 22

revealed that the Switch would be the first to get the Treasure Trove version and the Specter of Torment standalone campaign as system launch titles, with other platforms getting the update over a month later.

, Shovel Knight Showdown; and announced that

it and King of Cards would release alongside the long-awaited Plague, Specter, and King Knight amiibo figures and physical releases for PS4 and Switch. These were originally slated for April 9, 2019, but were delayed a few extra months.

On August 28, 2019, Yacht Club Games held their first and currently only Yacht Club Games Presents, basically their take on the Nintendo Direct formula. There, they revealed some new updates coming to the game, shed some light on amiibo functionality, and even announced Shovel Knight Dig, a new game in the Shovel Knight series developed by Nitrome. They also showcased new trailers for King of Cards and Shovel Knight Showdown, along with confirming that they and the amiibo would all be released in December 2019.

Shovel Knight also received his own amiibo figure, unlocking Challenge stages and customizable knights in the Wii U and 3DS versions, as well as co-op multiplayer on Wii U (until it became standard with the Treasure Trove update). This marks the first instance of an indie character receiving an amiibo. Plague, Specter, and King Knights later received their own figures as well.

Shovel Knight's rise to fame has led him to be a Guest Fighter and make cameo appearances in several other games, making him something of a mascot for retro-style indie gaming:

Shovel Knight also makes a cameo in the web animation Tales of Alethrion. 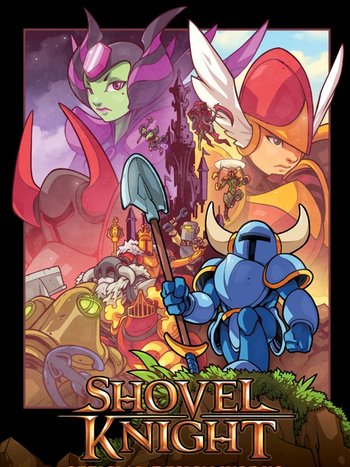 Dig your way through the main storyline!

Long ago, the lands were untamed, and roamed by legendary adventurers!
Of all heroes, none shone brighter than Shovel Knight and Shield Knight.
But their travels together ended at the Tower of Fate; when a cursed amulet wrought a terrible magic.
When Shovel Knight awoke, the tower was sealed, and Shield Knight was gone.
His spirit broken, a grieving Shovel Knight went into a life of solitude.
But without champions, the land was seized by a vile power: the Enchantress and her Order of No Quarter!
Now, the tower is unsealed, and devastation looms. A new adventure is about to begin... 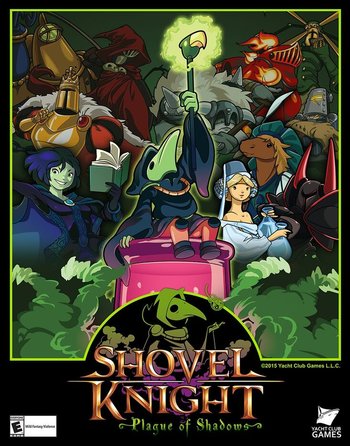 Long ago, the lands were untamed, and roamed by legendary adventurers!
But villainy ran rampant, and in time, even the most stalwart heroes fell.
In the absence of champions, the Enchantress and her Order of No Quarter swept into power.
Unbeknownst to everyone, the maniacal alchemist Plague Knight had plans of his own.
He sought nothing less than to concoct a potion of unlimited power!
A draft so fiendishly potent that nothing he desired would be out of his reach.
Each knight unknowingly guards a crucial ingredient. Now, the collection must begin... 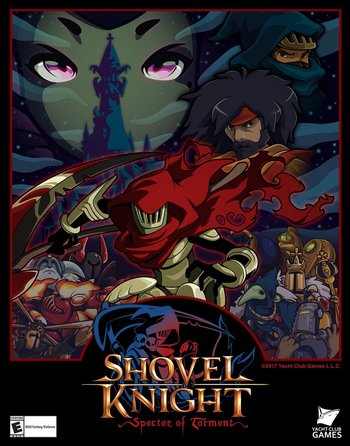 Slash and dash through the tragic prequel!

Long ago, the lands were untamed, and roamed by legendary adventurers!
But although the land is peaceful... for some, freedom is a far gone memory.
Specter Knight, servant to the Enchantress, has been given a harrowing task.
He must recruit a group of knights and form an invincible order!
With each member gathered, a treasured keepsake grows in power...
An artifact that can restore his humanity, but only when his task is complete.
Now, he leaves the confines of the Tower of Fate. It's time for the reaper to pursue his quarry. 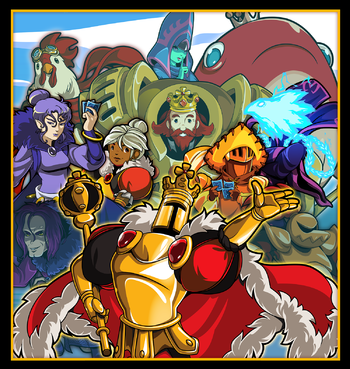 Match brains and brawns in this regal prequel!

Long ago, the lands were untamed, and roamed by legendary adventurers!
By all appearances, peace has flourished, and carefree new pastimes have taken hold.
A card game called Joustus has swept the land, and with it, word of a grand tournament.
Presiding over the contest are three Joustus Judges. These wise kings have been chosen to spread joy and unity.
This contest is of great interest to King Knight.
For though some call him a fool who merely plays at king, even fools know this:
Whoever defeats all three Joustus Judges will win an incredible treasure, and be crowned King of Cards!
Competing for the Joustus Crown is no simple matter, but King Knight schemes, undeterred, toward a kingdom of his own. 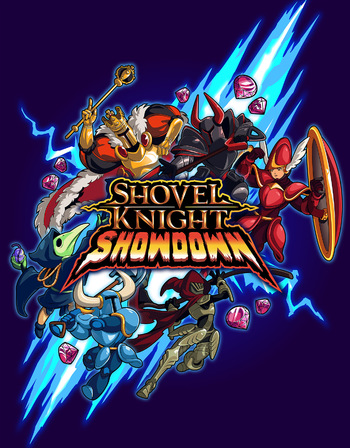 All was not well at the Tower of Fate. A terrible truth had been revealed.
Specter Knight stormed off, filled with rage at The Enchantress. Their final battle was imminent!
The residents of the Tower gathered. They boldly decided to rebel and help their friend.
Hastily, they hatched a plan to modify the Magic Mirror. Perhaps they could trap The Enchantress inside!
With the preparations complete, their ramshackle contraption sprang to life.
But something went terribly wrong...

Phantom Striker, having seen the power of The Enchantress, realizes he must stop hunting the undead to find a warrior who can defeat her.

Example of:
I Can't Do This by Myself

Phantom Striker, having seen the power of The Enchantress, realizes he must stop hunting the undead to find a warrior who can defeat her.