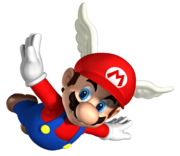 A Cool Hat or Cool Helmet that gives the wearer the ability to fly. Often has wings or helicopter blades.
Advertisement:

Rarely will anyone ask why it doesn't just fly off without its wearer...