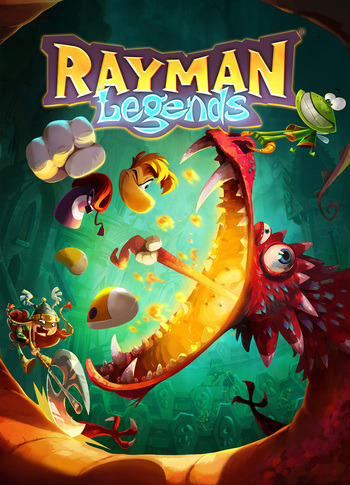 Become a hero of legend.
Advertisement:

Rayman Legends is the 2013 sequel to Rayman Origins. After defeating the Magician and saving the Glade of Dreams in Origins, Rayman, Globox, and the Teensies take a century-long nap, during which the nightmares grew in numbers and strength, becoming monsters of legend, like dragons and giant frogs, and the Magician returned, only with more of himself this time to cause more trouble than before. Rayman and his friends are awakened and, with the help of Murfy and new friend Barbara, must save the Glade again.

The sequel retains the first game's gameplay, art style (though with a more painterly look) and 4-Player co-op (5 players on the Wii U version, with the fifth player playing Asymmetric Multiplayer as Murfy on the GamePad), but goes in a more fantasy-based direction, with worlds based off fairy tales, Classical Mythology, Dia de los Muertos, and Spy Fiction with a dash of Jules Verne.

The game was originally set to be released as a Wii U exclusive in February 2013, but a couple weeks before its release date Ubisoft announced that it would be delayed until September in order to have a simultaneous multiplatform launch on Xbox 360, PlayStation 3, Playstation Vita and PC as well. These were followed by ports to the Xbox One and PlayStation 4 five months later. As an apology, the Wii U got the game's Challenge Mode as a free download in April. Plus, the production team used the extra time to add a lot of additional content to the game, including dozens of new levels.

An Updated Re-release labeled as the "Definitive Edition" came to the Nintendo Switch on September 12, 2017. Along with providing all previous Version-Exclusive Content costumes, it also splits off the Wii U and Vita versions' touch screen-based Murfy segments into an optional world playable only in handheld mode and includes a new tournament mode for the Kung Foot minigame.