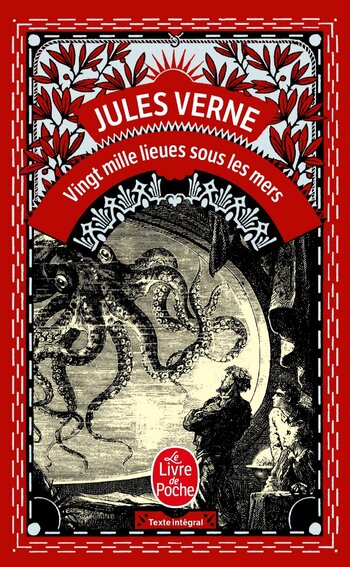 "That which is far off, and exceeding deep, who can find it out?"
— Ecclesiastes 7:24, The Bible
Advertisement:

Twenty Thousand Leagues Under the Sea is a 1869 French adventure novel by Jules Verne. It has a strong focus on technology, existentialism, and marine biology.

During a visit to America, Professor Aronnax, a famous French marine biologist, is invited to join a US Navy expedition in the hunt for a mysterious sea monster (believed to be a giant narwhal) that has attacked and damaged two ships. Once they find the narwhal, it attacks, causing Aronnax, his trusty manservant Conseil and Ned Land, the ship's Canadian harpoonist, to fall overboard (well, Conseil jumped, to rescue the Professor). They clamber onto the only dry spot in the sea, namely the narwhal's back, expecting to drown as soon as it dives. Then a hatch opens...

The mysterious narwhal is in fact not a whale, but a high-tech electric submarine known as the Nautilus, owned and designed by the mysterious and eccentric Captain Nemo. While refusing to put our heroes ashore, he lets them live, and takes them on a fantastic journey under the seas of the world, showing them the many wonders of the world beneath the waves. Aronnax finds himself torn between his passionate interest in marine biology and his desire for freedom - should he try to escape with his comrades or stay and find out why Nemo sails around the world?

The novel has a sequel, The Mysterious Island, which tells Nemo's Back Story.

Fun fact that people sometimes forget: the title refers to the distance the Nautilus travels horizontally over the course of the book, not the depth it dives to. 20,000 leagues vertically would be impossible, being 80,000 kilometers,note Verne used the metric league, which is 4 km or twice the circumference of the Earth. The translation is partly to blame; a closer translation would be Twenty Thousand Leagues Under the 'Seas', which is sometimes used in more modern translations. A Saturday Night Live sketch with guest host Kelsey Grammer as Nemo lampshaded this misconception.

The book is now out of copyright, and the original French text can be obtained from Project Gutenberg here.

done by Verne scholar Frederick Paul Walter, is a modern, highly accurate translation of the book, free of the errors that many other editions of the book have. Alternatively, check out the most common edition here.

The best-known adaptation of the novel is without much doubt the 1954 live-action film by Walt Disney Pictures. Atlantis: The Lost Empire, also by Disney, is very inspired by the novel.

The novel Twenty Thousand Leagues Under the Sea shows examples of the following tropes:

"Two men can answer: Captain Nemo and myself."
—Professor Aronnax on the Biblical quote above.