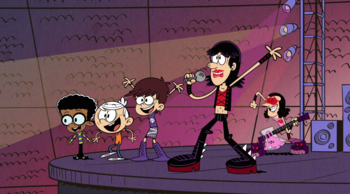 An episode where the main cast of a show spends the episode going to a rock/pop/other music genre concert, often with at least one of the characters having previously been a huge fan. Potential shenanigans include:

The list goes on. It's also common to have a celebrity cameo for a real-life musician. Compare Movie-Theater Episode, Musical Episode, and Pro Wrestling Episode. See Concert Climax.
Advertisement: