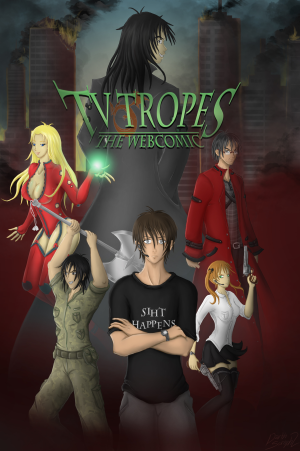 Clockwise from middle-right: Ayers, Ere, Report, Yug, Ecivres. Background: Dab note  Not pictured: Literally everyone else. If we did picture them, we'd take up the whole front page.note Illustration by EclipseSeraph

TV Tropes The Webcomic is a very simple slice of life webcomic. Well, okay, perhaps with a little embellisment and some sci-fi, maybe a little fantasy, lots of gags, and some cut and pastes. And lots of Metafiction.

The comic started off following an epic struggle of the N.G.O. Superpower W.I.K.I. (We Investigate Kool Incidents) to stop its breakaway organization K.I.L.A. (Killing Is Like Awesome) from Taking Over The World. The narration focused on Report Siht, a beginning agent of W.I.K.I. from the New Trope City, whose Big Brother Mentor Dab Gib goes missing on one of their missions. Report and his new partner, the short tempered Ere D. Nust, infiltrate K.I.L.A. and discover the shocking truth: its leader is none other than Dab Gib himself! Aided by Dab's brother Yug, the sexy agent "Ms." Ecivres Naf, and the mysterious freelancer Bertrand Ayers, Report and Ere set out to stop K.I.L.A. once and for all.

Without spoiling much more of the original arc (it was also the longest one, and rightly so), Report eventually leaves W.I.K.I. and starts a private Occult Detective business with Ere, who follows him into retirement. Since then, the comic has consisted of largely standalone story arcs (though frequent Call Backs prevented it from becoming an utter Continuity Snarl), which explored all kinds of themes and settings over its long, long run. So far the comic featured, among other things: a Time Travel arc, multiple Alternate Universe arcs, a Beach Arc, a Blindness Arc, a Noir Arc, a few Family Drama arcs, a Musical Arc, multiple Gaming Arcs, a What Do They Fear Arc, and, of course, Parody Arcs (but no Recap Arcs, we promise!). There's even going to be a Tournament Arc. After a couple of years, the original author abandoned the comic and it was picked up by a series of "guest authors". The arcs written by the original author became known as the "Golden Age", with numerous different authors contributing afterwards, creating their own "Ages" as the story grew more.

The comic can be read here. Actually, no. This comic does not exist (yet) but this page was deliberately styled after existing webcomic pages to perpetuate the illusion of the contrary. The story troped here, however, is as real as any—it's just being written by a cadre of fellow tropers and published in a deliberately confusing metafictional format. Compare Avatar and the Airbending Fellowship of Vampire Slayers.

This fake webcomic provides examples of: