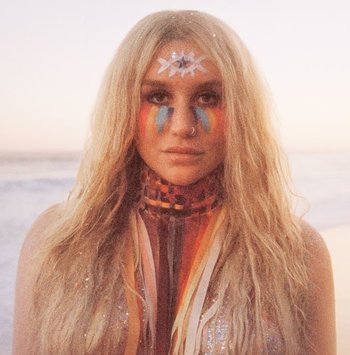 The party don't start till I walk in...
— Kesha, "Tik Tok"
Influences:
Advertisement:

Born in Los Angeles but raised in Nashville, Kesha first reached prominence in the music industry with (uncredited, at the time) guest vocals on "Right Round" by Flo Rida, which was released to global success in early 2009. During this time, she also wrote songs for Miley Cyrus ("The Time of Our Lives"), The Veronicas ("This Love"), and Britney Spears ("Lace and Leather"), among others.

By the end of 2009, she released her debut single "Tik Tok", which became a massive hit. In addition to setting a record for the most downloads in a single week by a female artist (610,000), it also has the distinction of being the fifth-highest selling digital single of all time.

Her debut album Animal was then released on the very first day of the 2010s, and proved to be a similar success on the charts worldwide. After a string of additional hits ("Blah Blah Blah", "Your Love is My Drug", and "Take It Off"), Animal was re-released as Cannibal, supported by the singles "We R Who We R" (which gave Kesha her second #1) and "Blow."

Kesha's second album, Warrior, was released in 2012 to middling success. During this time, she also teased a collaborative album with the Flaming Lips —titled Lipsha— which was ultimately canceled because of issues with her label and frequent producer Dr. Luke. In 2016, Kesha's long-running tension with Dr. Luke specifically exploded messily in the news, with claims that Kesha was legally forbidden from releasing new music because of it. And that's all we're going to say here.

Despite her personal (and professional) troubles, Kesha finally released a third studio album, Rainbow, in 2017 — her first in nearly five years. Characterized by achingly personal lyrics and a more organic sound than her previous efforts, Rainbow earned Kesha the critical acclaim she'd perhaps lacked until up until that point. It's also notable for including a cover of "Old Flames (Can't Hold a Candle To You)" by Dolly Parton —a song co-written by Kesha's mother, Pebe Sebert— which she previously covered on her Deconstructed EP in 2012. The new version also features Dolly Parton herself on guest vocals.

Her fourth record, High Road, dropped in early 2020. Following up from the cathartic material on Rainbow, Kesha described it as a return to the brighter tone of her early work, and blends the more down-to-earth elements of the last album with the party-focused subject matter of Animal and Warrior. In November 2020, she started the podcast, Kesha and the Creepies, where she explores and discusses the occult, urban legends and simliar subjects pertaining to the supernatural.

Kesha's signature style can be roughly summed up as retraux-style Synth-Pop with tomboyish lyrical themes and Auto-Tune up the wazoo. She typically includes satirical lyrics that objectify men to point out how male singers and rappers tend to objectify women. She also incorporates a a healthy dose of rock influence, and has collaborated with famous rock musicians such as Iggy Pop, Alice Cooper, and Flaming Lips. (Alice Cooper noted that she wasn't a pop diva so much as a rock star). She also frequently incorporates a talky style of rapping with exaggerated phrasing and enunciation. She tends to experiment a bit.

Kesha and her work provide examples of the following tropes: