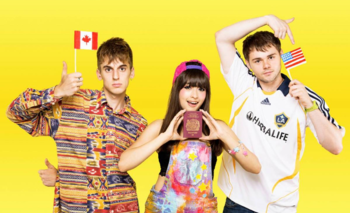 "It's KKB! Let's go!"* From left to right: Jamie, Sarah, and Gus
Advertisement:

Kero Kero Bonito is a London-based electronic pop trio consisting of vocalist Sarah Midori Perry and producers Gus Lobban and Jamie Bulled. Active since 2011, the band has an idiosyncratic yet bright and colorful approach to pop music, taking influence from Japanese Pop Music and Game Music, with quirky, MIDI-sounding instrumentals and bilingual lyrics crossing English and Japanese. Their songs tend to be irresistibly sweet with a playful sense of humor, yet creative and sincerely positive the whole way through.

After releasing a plethora of singles following the group's creation, including hits such as "Flamingo" and "Sick Beat", they released their debut mixtape Intro Bonito in 2014. Their debut commercial album, Bonito Generation, serving as its follow-up, was released in late 2016. In early 2018, they released the TOTEP EP, which introduced a new, darker sound more inspired by Alternative Rock and Noise Pop, serving as a teaser to their second album, Time 'n' Place, which released on October later in the year.

In addition to the band, Gus Lobban also has a solo project called Augustus and a heavy-on-Stylistic Suck PC Music-affiliated project called "kane west" (not to be confused with that other guy). Jamie Bulled was part of a band called Kabogaeries before KKB, and releases solo work under the name WHARFWHIT. Sarah Midori Perry has lent her voice to other fellow producers, being a featured artist as "Sarah Bonito" for acts including マクロスMACROSS 82-99, Spazzkid, SOPHIE, and moon mask, and has also contributed a handful of songs for We Bare Bears. In 2022, Sarah started a solo electronic act, Cryalot (previously used as a DJ name since 2019), with a debut EP titled Icarus released in September 2022.

For those curious, their band name is deliberately meant to be vague. "Kero" is a Japanese onomatopoeia for frog croaks (equivalent to "ribbit"), but a "bonito" is a type of fish, and the title as a whole can mean "I want, I want beautiful" in Portuguesenote via the homonymous quero, "I want". To paraphrase Gus

, it's meant to be a name you can't tell the origin of.