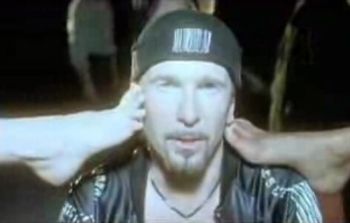 So you're ready to film a Music Video for your new single. The only problem is you think that a simple Performance Video just won't cut it, you haven't got a budget for the Great Balls of Fire!, you find the Surreal Music Video idea pretentious and the Animated Music Video stupid. Or you're just tired and don't feel like doing it.

Times like this call for the Inaction Video. The concept behind such a video is remarkably simple: the band or the Face of the Band stand around motionless or calmly perform their song while the background's dedicated to either Funny Background Events or a wild party with lots of people. The key here being that the band never acknowledges their surroundings and just does their own thing independent of what's going on while looking completely bored/disinterested/high. May involve an extreme Weirdness Censor. Usually they Leave the Camera Running.

Almost always Played for Laughs. Understandable, since it's not a concept that lends itself easily to drama. Or if it does, it tends to tumble into Narm.

Not to be confused with monochrome backdrop videos. The funny or meaningful background events and the Weirdness Censor are essential for the Inaction Video.