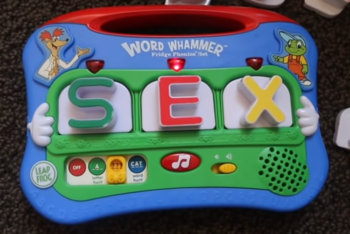 Young children get many toys designed to help them learn to speak words and spell them out. These skills are very important to a maturing child, so the toys are helpful. In the hands of a teenager or adult, however, the proper limits of the toy are pushed almost immediately, to the point of near improbably ad infinitum.

This trope deals with the toys that can be bent to swear or say otherwise inappropriate things.

When the batteries run down, see Electronic Speech Impediment.