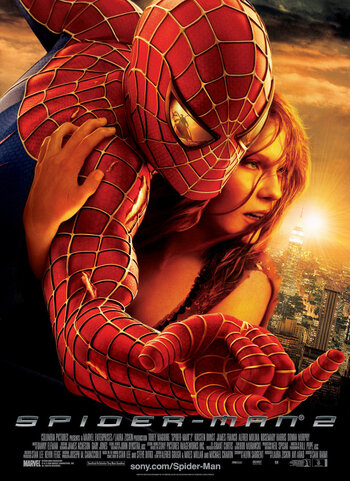 Sacrifice. Destiny. Choice.
"I made a choice once to live a life of responsibility. A life she can never be a part of. Who am I? I'm Spider-Man, given a job to do. And I'm Peter Parker, and I too have a job."
— Peter Parker / Spider-Man
Advertisement:

Following the events of the first film, Peter Parker is struggling to find balance in his life, as the increasing burden of being a superhero gets in the way of his relationship with his studies, job, friends, family, and the woman he loves. Once the stress begins to affect his powers, he decides to give up being Spider-Man once and for all.

This comes at a bad time, since the brilliant scientist Dr. Otto Octavius (Alfred Molina) is caught in a Freak Lab Accident that not only kills his wife but also leaves four mechanical tentacles permanently attached to him. Going insane, he becomes the evil "Doctor Octopus" and is determined to retry the failed experiment on a much bigger scale — For Science!, of course. With the city in danger and his relationship with Mary Jane in doubt, Peter is forced to "get back to work".

Under a month before the release of Spider-Man 3 in 2007, an extended cut of this film was released titled Spider-Man 2.1, containing new special features, eight minutes of additional footage, and a sneak peek of 3.

Followed by Spider-Man 3. Alfred Molina reprises the role of Doctor Octopus in Spider-Man: No Way Home.