Fade Around the Eyes 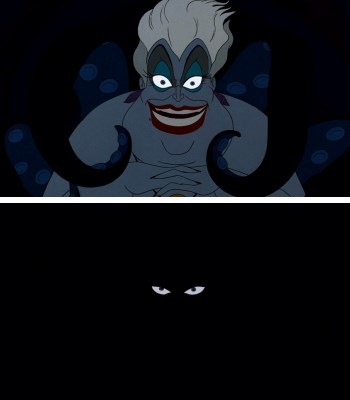 The creepiest of scene transitions.
Advertisement:

So, you have a dramatic scene with your villain. Wouldn't it be so awesome if you ended this bombastic tour-de-force with something more quiet and subdued? What better way to do that than with a Fade Around the Eyes?

A subtrope of By the Lights of Their Eyes and "Uh-Oh" Eyes, this is when everything on the screen fades away, except for a character's eyes (though other facial features, such as teeth, may be used as well.) It is more often than not done at the end of a scene, as a transition to the next, though it can happen at any time. What matters most is that it's done for dramatic effect. It usually begins with a close-up of the character's face, seemingly looking straight at the audience.

Usually, this trope goes as follows: The character looks at the screen, which completely fades to black, except for the character's facial features, which then fade to black themselves. The now completely black screen then fades to the next scene. Less commonly, the black screen is skipped altogether, and it just fades straight to the next scene, but the facial features are still the last things you see.

Unlike By the Lights of Their Eyes, which is usually a result of Limited Animation, this trope is done for dramatic effectnote Although By the Lights of Their Eyes can be used dramatically as well. It is usually done by villains, who often do it at the end of a Villain Song. It is exceedingly rare for a non-villainous character to do this, but even if the character isn't evil, this trope can be a sign that the character is either dangerous, Dark Is Not Evil, an Anti-Hero, a Jerkass, or perhaps some combination of those traits. Another common feature of this trope is that the character who does it will usually have one eyebrow raised, and a smile, as the background fades away.

The cause of the fading varies. Sometimes, it just happens, with no other explanation than Rule of Scary. Other times, it fades or turns to black because the room is filling with smoke. There are even cases where it's a mix of both! There will be fire or lightning around the character, and when it disappears, the screen inexplicably goes black, leaving the villain's evil eyes.

By the way, we would like to point out that this trope has a really cool acronym. Here's a handy-dandy phrase to help you remember the title: When your enemy does this, your FATE is sealed!

This has become a staple of animation, especially in works by Disney.

Be careful when adding examples. The eyes are usually the brightest-colored parts of a character's face, so it can seem like this trope is happening even when the entire face is fading at the same time.

Fade Around the Eyes, Trope Co.'s all new lightbulb brand (perfect for all villains who enjoy a little dramatic flair), is now available in catalogs!