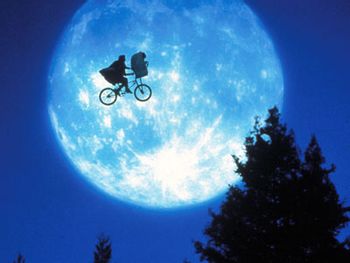 Character flies in front of a full moon, making a silhouette. Popularized by E.T. the Extra-Terrestrial.

Since this often requires the moon to be large enough for a silhouette, this trope tends to coincide with Gigantic Moon (it can be done without such trickery, provided you set the camera up a long way from the foreground object and use a powerful telephoto/zoom lens). Almost always paired with Frequently Full Moon.