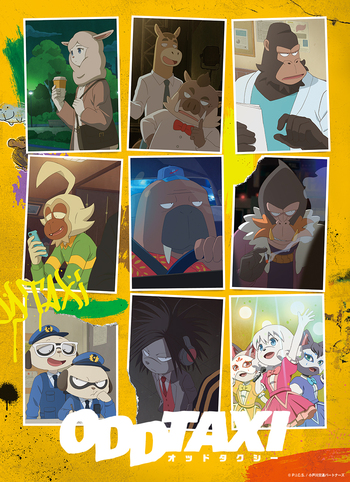 There's something odd about this town...note From left to right, top to bottom: Shirakawa, Homo Sapiens, Goriki, Kakihana, Odokawa, Dobu, the Daimon Brothers, Yano, Mystery Kiss
In a city which should be familiar, there is the feeling of something a little different.
Advertisement:

Odokawa is a taxi driver who lives an ordinary life, taxiing some quirky customers around. A slightly eccentric stranger who has no relatives nor any relations with other people, Odokawa's hobby is to listen to Rakugo on the radio before going to bed. For the time being, the only people he can consider as friends are his family doctor Gouriki, and his high school classmate Kakihana.

Kabasawa, a college student who wants to go viral on social media, Shirakawa, a nurse who's hiding something, comedian group Homo Sapiens, who aren't selling well, the city hoodlum Dobu, and the rookie idol group Mystery Kiss—the conversations with these people, which should not have meant much, lead to a girl who disappeared.

Odd Taxi is an original anime produced by OLM Incorporated. It is the directorial debut of Baku Kinoshita, with Kazuya Konomoto as the writer. The series aired in the Spring 2021 season, with Crunchyroll currently holding the English streaming rights. The anime also got a manga adaptation that started releasing on January 15th, before the anime's actual release, with art by Takeichi Abaraya and story by Kazuya Konomoto.

Not to be confused with Crazy Taxi.