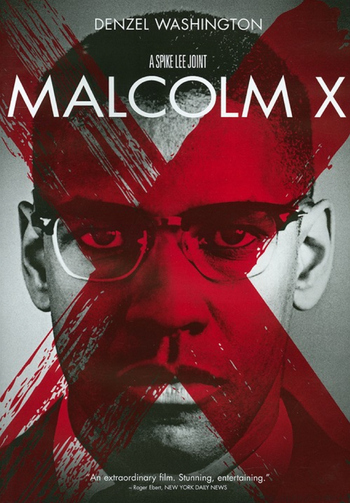 "Cats that hung out together trying to find a solution found nothing. Cats that might have probed space or cured cancer, West Indian Archie might have been a mathematical genius... but we were all victims of the American social order."
— Malcolm X
Advertisement:

The film starts with his childhood as Malcolm Little, who later grows up to be a gangster with his best friend Shorty. In prison, he is introduced to the teachings of the Nation of Islam and officially names himself Malcolm X upon release. He initially preaches black separatism, but renounces his extreme beliefs when he makes the pilgrimage to Mecca. Of course, this doesn't go well with others.

Originally this was going to be directed by Norman Jewison (In the Heat of the Night, Fiddler on the Roof), which attracted criticism and demands that the story be done by a black filmmaker. It caused a bit of a controversy when Spike Lee said in an interview that kids should skip school in order to see the movie, as well as a fashion fad of hats and T-shirts with "X" on them (since a single letter can't be copyrighted, these were easy to produce). It was the first non-documentary to gain permission to film in Mecca, though Spike Lee was not there to do so, as, being non-Muslim, he was forbidden to enter the city.

Compare Gandhi, another three-hour biopic about a murdered civil rights activist, released ten years before this one.