Film / In the Heat of the Night 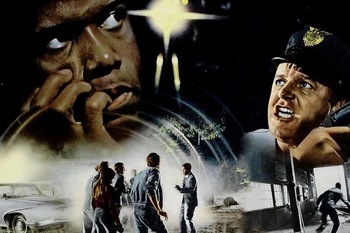 Police Chief Gillespie: You're pretty sure of yourself, ain't you, Virgil? Virgil—that's a funny name for a nigger boy that comes from Philadelphia. What do they call you up there?
Det. Virgil Tibbs: They call me Mister Tibbs!
Advertisement:

A 1967 mystery thriller film based on a 1965 novel of the same name by John Ball, directed by Norman Jewison and starring Sidney Poitier and Rod Steiger. The supporting cast includes Warren Oates, Lee Grant, Larry Gates, William Schallert, and Scott Wilson in his screen debut.

On his way back home after visiting his mother, black Philadelphian Virgil Tibbs (Poitier) finds himself arrested on suspicion of the murder of a prominent factory owner in Sparta, Mississippi, due to the simple circumstance of his being a black man found sitting in a train station with money in his pocket. However, while being questioned by Sparta police chief Bill Gillespie (Steiger), Tibbs reveals that he is in fact a police officer himself, and when Gillespie phones his department for verification and mentions that they're working on a murder, Tibbs is told by his Philly superiors that he should assist the locals in solving the case — partnered with the hot-tempered, casually-racist Gillespie. It's a rocky beginning to the partnership, but the more that Tibbs displays his detective prowess, the more that Gillespie comes to respect (and rely on) him. Working together, chasing several false leads, and fighting against the truly rabid racism of some of the local rednecks, they gradually uncover the truth of the case.

Released at the height of American racial tensions during the '60s civil rights era, the film was both a commercial and critical success, receiving seven Academy Award nominations and winning for Best Picture, Actor (Steiger), Editing (Hal Ashby), Adapted Screenplay (Stirling Silliphant), and Sound. Quincy Jones composed the music score. Poitier went on to reprise his role in the sequels They Call Me Mister Tibbs! (1970) and The Organization (1971), both of which are set in San Francisco and feature more of an urban flavor.

Twenty years later the film spawned a TV series with different actors, which has its own page.

"They call me MISTER TROPES!"