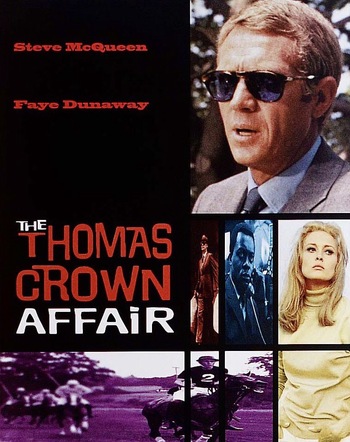 Millionaire Thomas Crown (McQueen) has just pulled off the perfect crime, taking more than $2.6 million from a bank in Boston and socking it away in a Swiss bank account. Vicki Anderson (Dunaway) is an independent insurance investigator contracted to investigate the heist, who will get a portion of the stolen money if she manages to recover it. Crown obviously doesn't need the money, but is constantly in search of diversions, welcoming Vicki's interest in him as a way to alleviate his boredom, even though she informs him from the start that she knows he's the one who pulled the job, and intends to prove it. Their relationship develops into a full-blown affair, complicated by Vicki's determination to recover the stolen money.

Also notable is the film's opening theme, "The Windmills of Your Mind

," written by Michel Legrand and performed by Noel Harrison. It has since become a pop standard and has been covered by many other artists, including Sting (for the film's remake), Johnny Mathis, Dusty Springfield, and even Jerry Nelson in The Muppet Show!