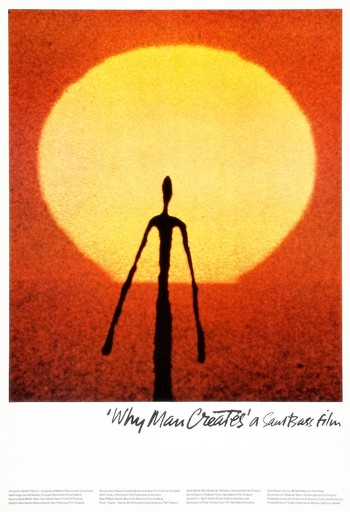 This film is a loose series of vignettes, only some of which deal with the idea of man's need to create. The first segment is "The Edifice", a short cartoon that in two minutes manages to tackle the whole history of the human race, symbolized as an ever-growing skyscraper. It's followed by "Fooling Around", a series of Clip-Art Animation gags. "The Process" is the first vignette that really deals with creation as an idea, featuring a sculptor struggling to fit blocks together into a larger shape; his task is complicated by the fact that the blocks can move on their own. "Judgment" shows a crowd of people reacting very unfavorably to...something. "A Parable" is just that, a parable about a misfit ping-pong ball that bounces higher than all the other balls at the ping-pong ball factory. "The Search" features brief interviews with several scientists, who describe the research they're doing in various fields. Finally there's "The Mark", in which Bass concludes that man creates in order to affirm his own existence.

Saul Bass was better known as a title designer for films, most famously designing the opening credits for Psycho. An edited version of this short ran on the very first episode of 60 Minutes. George Lucas worked as a cameraman on this film.