Film / I Married a Witch 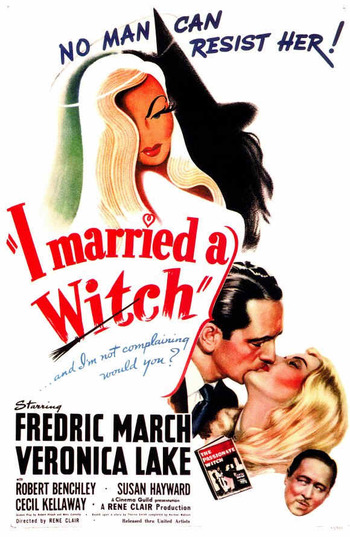 I Married a Witch is a 1942 romantic comedy-fantasy film directed by Rene Clair, starring Fredric March and Veronica Lake. It was nominated for an Academy Award for Best Music, and was said to have inspired the popular television show Bewitched.

For generations, the men of the Wooley family (all played by March) have married henpecking wives. This is because centuries before, a witch called Jennifer (Lake) cursed Jonathan Wooley's (March) family to "marry the wrong woman" before being burned at the stake with her father Daniel after Wooley accused her.

Centuries later in the present day [1942], the tree that Daniel and Jennifer's ashes are buried under is hit by lightning, awakening their spirits and becoming human again. The two soon meet the latest Wooley to fall under their curse: Wallace (March), who is engaged to a shrew called Estelle (Susan Hayward) and running for governor. For her own amusement, Jennifer decides to trick Wallace into becoming attracted to her by drugging him with a love potion, however, through a mix-up, she falls into her own trap and drinks the potion instead.