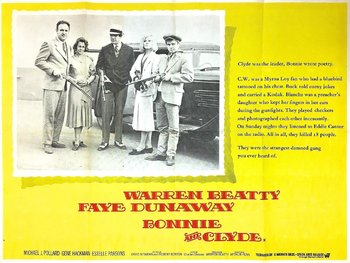 Bonnie and Clyde was an unexpected smash hit that made huge stars out of Beatty and Dunaway. It was nominated for ten Academy Awards and won two, for Best Supporting Actress (Parsons) and Best Cinematography (Burnett Guffey). It is regarded as part of the first wave of the New Hollywood movement that helped to break down the studio system and usher in a creative rebirth for Hollywood, with its increased sex and violence, glorification of anti heroes, and skepticism of authority.

Gene Wilder, in his film debut, has a small part as a kidnap victim of the Barrow Gang.

See also The Highwaymen, which tells the story from the perspectives of Frank Hamer and his partner, Maney Gault.