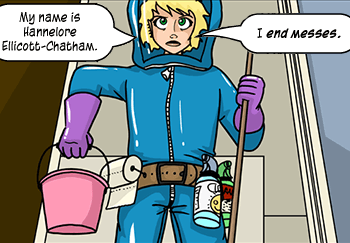 A character establishes their cachet by making a laconic self-statement, often in the form of a Badass Creed. This commonly follows the formula:

A variation inserts the character's role or vocation:

This trope echoes the old military tradition of revealing nothing to your captors but "name, rank and serial number," as well as the poetry of saga.

Not to be confused with Try to Fit That on a Business Card, which is usually much wordier.