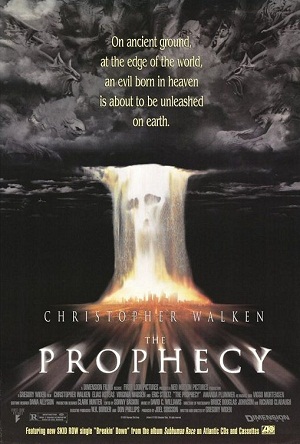 "Did you ever notice how, in The Bible, whenever God needed to punish someone, or make an example, or whenever God needed a killing, he sent an angel? Did you ever wonder what a creature like that must be like? A whole existence spent praising your God, but always with one wing dipped in blood. Would you ever really want to see an angel?"
— Thomas Daggett
Advertisement:

The Prophecy is a series of Religious Horror films released in The '90s. The series was created and the first film written and directed by Gregory Widen (who also created Highlander).

The first film, The Prophecy (released in 1995), tells the story of the Archangel Gabriel (Christopher Walken), who's angry that God loves humans (or "talking monkeys," as Gabriel likes to call them) more than angels. Gabriel comes to Earth in search of the evil soul of Colonel Hawthorne, a deceased Korean War veteran, in order to gain an advantage in a war being fought in Heaven. Another angel, Simon (Eric Stoltz), intercepts Hawthorne's soul and hides it in the body of a young Native American girl named Mary (Moriah Shining Dove Snyder). Now it's up to Thomas Daggett (Elias Koteas), a police detective who once aspired to be a priest but lost his faith in God years ago, and Catherine (Virginia Madsen), Mary's schoolteacher, to protect Mary before Gabriel gets to her. Viggo Mortensen co-stars as Lucifer.

If you were looking for the eco-horror film, see Prophecy.