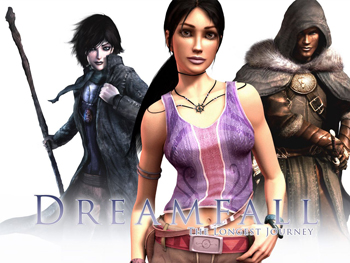 The second game of the The Longest Journey Saga, it is an Oddly Named Sequel to the Adventure Game classic The Longest Journey. The game was released in 2006. It introduces a new heroine, Zoë Castillo, a 20-year-old college dropout living in Stark (our familiar Earth, albeit two centuries into the future) ten years after the events of the original TLJ. After she starts receiving eerie messages from a Stringy-Haired Ghost Girl to go "find April, save April" (and her ex-boyfriend disappears on top of that), Zoë has no choice but to delve into another conspiracy investigation. Meanwhile, April, the heroine of the original game, is effectively trapped in Arcadia (the magical alternate reality) and fights against The Empire of Azadi, while an elite Azadi Super Soldier and third protagonist, Kian Alvane, is sent to assassinate her. Fans welcomed Dreamfall enthusiastically, but the reviews were rather mixed, primarily "thanks" to unsatisfactory (and, according to many, superfluous) action-adventure elements and the ending being a love child of a Cliffhanger of cosmic proportions and the No Ending trope.

Another oddly named episodic sequel, Dreamfall Chapters, was released between October 2014 and June 2016. It ties some of the numerous loose ends that were Left Hanging after Dreamfall back together and gives a conclusion to Zoë's story arc.

Example of:
The Guards Must Be Crazy