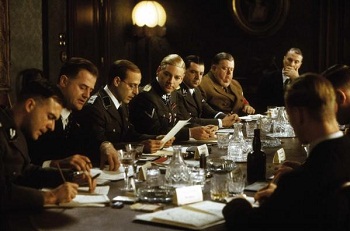 15 men determine the fate of an entire people over appetizers.
"This is...more than war. There must be a different word for this."
— Friedrich Wilhelm Kritzinger, about The Holocaust
Advertisement:

Conspiracy is a 2001 HBO / BBC TV film that dramatizes the story of the 1942 Wannsee Conference, one of several meetings of German civil and party officials which authorised the Security Police department of the SS to organize the deportation of Jews from and to anywhere it wished as part of what would ultimately be called "Operation Reinhard" note  The benefits for the Security Police department were three-fold. Firstly, the removal of all Jews from certain districts would endear them to the district leaders. Secondly, district leaders in the (now-overburdened) districts the Jews were deported to would then be forced to choose between risking rebellion (through insufficient rations), running at a budgetary loss (through sufficient rations), or direct murder. Thirdly, since the district leaders in the destination-districts would presumably murder the Jews, the Security Police could rightfully claim that it had played a leading role in eliminating those Jews (and so beat the District Security Chiefs (HSSPFs), Order Police, and Special Task Forces (Einsatzgruppen) who had hitherto played the largest roles in eliminating Jews) It is an English-language adaptation of Die Wannseekonferenz, a German film that tackled the same subject matter; both films are shot in Real Time and used the only surviving copy of the minutes of the meeting, which was found in the papers of Undersecretary Martin Luther, as the basis for their scripts.

Starring an Ensemble Cast, including Kenneth Branagh, Colin Firth and Stanley Tucci, the film follows SS-Obersturmbannführer (Lieutenant Colonel) Adolf Eichmann as he organizes the meeting itself. Represented are the Security Police (under Heydrich), Criminal Police, Regional Security Chief for the Generalgouvernement, a representative of Hans Frank's Generalgouvernement, Alfred Rosenberg's Ministry for the Occupied Eastern Territories, the Ministry of the Interior, the Ministry of Justice, the Foreign Office, the Party Chancellory, the Reich Chancellory, the SS Race and Settlement Office, and the Luftwaffe's Four Year Plan Organisation. All have been recalled to the Berlin suburb of Wannsee from their duty stations for a conference, but very few have heard what the conference is actually meant to cover. After a round of genial introductions and conversation over appetizers, SS-Obergruppenführer (General-equivalent) Reinhard Heydrich, the conference's ranking member, arrives and explains that they are there to discuss what to do with 'The Jews'.

Though the meeting is phrased as a discussion panel for the formulation of policy, Reinhard Heydrich quickly makes it clear that the policy has already been decided and he is there to inform everybody of their roles: namely, starting in the summer the 'unskilled' Jews currently held in Germany's eastern districts and the Generalgouvernement will be deported to extermination facilities (currently under construction) in the Generalgouvernement staffed by local police forces (under the command of the SS District Chiefs). Those who argue against this policy, either because they feel the mass execution of all 'unskilled' Jews goes too far or because they feel the policy has been poorly thought out and will have negative consequences for Germany, are persuaded or threatened by Heydrich into agreement in a series of private conversations during brief lulls in the meeting. The Generalgouvernement, on the other hand, would like the process sped up so that it will not have to keep shouldering the burden of feeding so many Useless Mouths.

The film is a unique examination of the psychology and logic of genocide. It is one of very few attempts to tell the human story of those who planned elements of the Holocaust, and how they came to terms with what they felt they had to do. To help in this regard actors were expected to remain both in-costume and in-character for each day of filming. Kenneth Branagh, who played Reinhard Heydrich, has said that filming Conspiracy was one of the most disturbing experiences of his acting career. The film was shot in ten minute takes, often requiring actors to memorize a large amount of script, using only one fixed set, and natural lighting. There is no soundtrack.

All portrayed characters were actual German officials who took part in the real Wannsee Conference, with their accurate ranks and areas of responsibility.

Not to be confused with The Conspiracy. Another German film based on the same events, also called Die Wannseekonferenz, was released in 2022.

Kritzinger: It is night in Moscow already. Soon it will be dark here. Will the dawn come within any of our lifetimes?