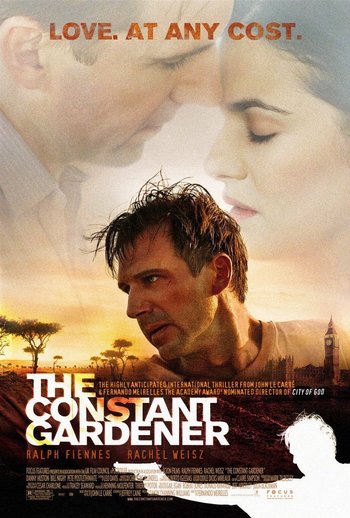 And we do mean any.
Advertisement:

A 2005 political thriller film directed by Fernando Meirelles, based on the 2001 novel by John le Carré.

We open with Justin Quayle (Ralph Fiennes), a mild-mannered British diplomat, saying goodbye to his wife Tessa (Rachel Weisz) at an airfield in Kenya. A few days later Justin's boss tells him Tessa may have been killed.

Cut without warning to Justin and Tessa's first meeting. Justin makes a prepared statement at the UN; Tessa uses the Q&A to go after him, the positions in the speech he read, and British foreign policy. The two of them end up continuing the discussion over drinks, and start a relationship.

In the present, Justin confirms that she has truly been killed, and begins to ask questions about the crime. What at first seems like the result of infidelity blown out of control starts to look like it might be related to Tessa's activism. Meanwhile, more flashbacks show how their relationship developed and fluctuated, and hint at Tessa's efforts to uncover human rights abuses, the extent of which were never completely shared with Justin.

His efforts to retrace his wife's steps and unravel a conspiracy that involves multinational corporations, corrupt local officials, and possibly some of his own superiors takes him around and between Africa and Europe. In the process, he tries to finally understand his wife's life, come to terms with their personal history, and honor her memory. Will the crimes of the powerful be exposed, will he be able to finally connect with Tessa after her death...and will he survive the journey?

The film is beautifully and artfully filmed, and plenty of the Camera Tricks are put in play at some point. But between the Flash Backs and Justin's Dream Sequences/ hallucinations, it takes some thought to keep up with the narrative.