Film / The Color of Friendship 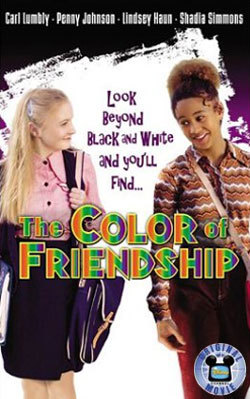 The Color of Friendship is a 2000 Disney Channel Original Movie directed by Kevin Hooks and based off of Simunye, a short autobiographical story by Piper Dellums.

In 1977, Steve Biko, the famous anti-apartheid activist, is arrested by South African authorities. Around this time, Mahree Bok (Lindsey Haun), a young Afrikaans girl, decides to spend a semester abroad in the United States, and learns she will staying with the family of U.S. Congressman Ron Dellums (Carl Lumbly).

Unbeknownst to her, Ron Dellums is not only black, but one of the most outspoken critics of apartheid in Congress. His daughter Piper (Shadia Simmons) is excited about the prospect of meeting what she assumes will be a black girl her own age from a foreign country.

When Mahree and Piper meet, they are confused and shocked. Mahree spends the first few days locked in her room, and Ron is dismayed that a racist girl is spending time in his home. Gradually Mahree opens up to the family, she and Piper become friends, and she realizes black people aren't so different. But when a scandal hits South Africa, it may force Mahree to see the oppression in her own country or drive a wedge between her and Piper.

The film was positively received for its message and its frank but nuanced discussion of race, and it won an Emmy Award for Outstanding Children's Program.

The Color of Friendship provides examples of: