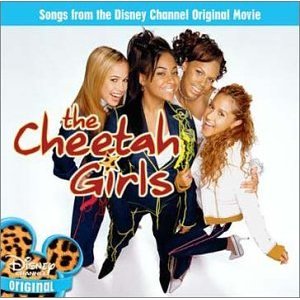 The cast of the movie adaptation.
Advertisement:

The Cheetah Girls is a 16-book novel series created and written by Deborah Gregory. The series, which began in 1999, is about a female vocal group seeking success and fortune. In the book series, there are five Cheetah Girls, Galleria, Chanel, Dorinda, Anginette, and Aquanette. The book series was made into a Disney Channel original movie in 2003, starring Raven-Symoné as Galleria, Adrienne Bailon as Chanel, Sabrina Bryan as Dorinda, and Kiely Williams as Aquanette (the character of Anginette was removed from the movie). Two sequels were made, The Cheetah Girls 2 (2006) and The Cheetah Girls: One World (2008). The band was also de-fictionalized with Adrienne Bailon, Sabrina Bryan and Kiely Williams.

The books and movies contain examples of:

Aqua: [As her foot gets caught, first lines of the film] AGH! Somebody help!
[The girls, sans Galleria, try to help out Aqua but end up tripping each other as everyone laughs at them.]
Galleria: [Moments later, as the opening number ends] Together we can!
Dorinda, Chanel, Aqua: AGHH!
[At the same time Dorinda, Chanel, and Aqua slam into Galleria causing all three to fall over. Everyone laughs at the Cheetah Girls as they try to leave]