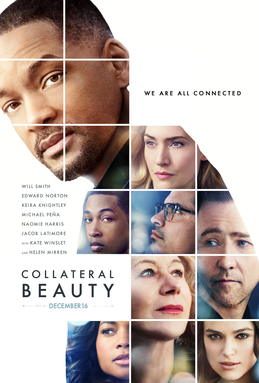 We are all connected.
Advertisement:

Collateral Beauty is a 2016 film about a man who, after losing his young daughter, writes grief-stricken letters to Death, Love, and Time, only to be surprised when they show up to answer the letters in person.

Howard Inlet (Will Smith) is a successful advertising executive who lost his six-year-old daughter to a rare form of cancer. Two-and-a-half years after her death, Howard is still completely disconnected from his life and business, and the firm is on the brink of bankruptcy because it has lost his clients. Howard's partner Whit (Edward Norton) has come up with a buyer for the company, but Howard refuses to discuss anything with him, spending all his time in the office building elaborate domino displays. Whit enlists employees Claire (Kate Winslet) and Simon (Michael Peña) in an attempt to save the sale by hiring a trio of actors — Brigitte (Helen Mirren), Amy (Keira Knightley), and Raffi (Jacob Latimore) — to portray the concepts of Death, Love, and Time to speak to Howard and help him come out of his depression. However, secrets are revealed and nothing is as it seems...

The film was subject to a marketing campaign that depicted the film as a spiritual drama, while the final product tells the audience clearly from the get-go that the concepts are actually actors who were hired by Howard's friends in an attempt to get him the help he needs. Or is that what's really going on?