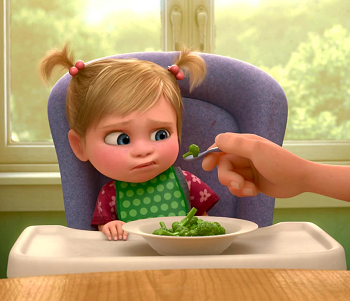 Disgust is the perfect emotion for situations like this.
"Ian, why don't you say grace"
Dear God: thanks, and if you loved me, vegetables would be extinct
Now I'm looking down the barrel of a string-bean side
like an Exodus of biblical proportions redefined
— Aesop Rock, "Grace"
Advertisement:

In fiction, children tend to have a disgust for vegetables and dread the moment they're served for dinner or lunch. It could be that they're Picky Eaters or their taste buds just are more sensitive to bitter tastes, which are found in many vegetables. Or their parents (usually the mom in fiction) has poor culinary skills and cooks them to an unappetizing mush. Whatever the cause, they will devise a mischievous plot behind their parents' back to get rid of them, which usually never ends well. This can often be used as an exploitative device for parents or babysitters to torture disobedient kids, though in most cases they just want to ensure a healthy diet in children to assist in their growth. Oftentimes, the kids will resort to hiding the vegetables, feeding them to a pet, putting them on a sibling's plate, or using a junk food condiment to diminish the squeamish flavor.

In Japanese media, this primarily is focused on bell peppers and carrots. To the point that in many cases, a dislike of those foods as a teenager or adult is used to indicate lingering immaturity in a character.

Overlaps with Does Not Like Spam and Picky Eater. Subtrope of Stock "Yuck!". May involve Greens Precede Sweets if dessert is used as a bribe. Also possibly related to If It Tastes Bad, It Must Be Good for You and Disgusting Vegetarian Food.

This can very much be Truth in Television, as anyone who remembers their childhood can attest to.

Kitty, Mimi, and all of their friends (who are all young kids) hate vegetables.

Kitty, Mimi, and all of their friends (who are all young kids) hate vegetables.