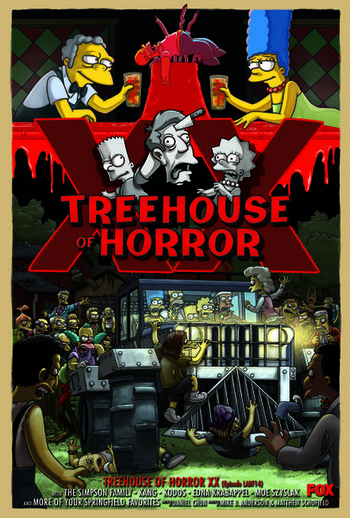 The Simpsons return in their twentieth "Treehouse of Horror" special with three tales of diverse terror.
Advertisement:

Dial M for Murder or Press # To Return to the Main Menu: In a send-up of Alfred Hitchcock's classic suspense films (with Strangers on a Train being the main reference), Bart gets Lisa involved in a "criss-cross" revenge scheme, but while Lisa thinks the plan is just harmless practical jokes, Bart sees it as an opportunity for murder.

Don't Have a Cow, Mankind: In this bizarre 28 Days Later meets Children of Men tale, Springfield is once again overrun by zombies (now called "munchers"), this time, thanks to Krusty's latest fast food sandwich made from cattle with mad-cow disease — and the only one not affected by the tainted meat is Bart.

There's No Business Like Moe Business: In this parody of Broadway musicals (particularly Sweeney Todd), Moe buys a microbrew machine to make a new beer — and Homer's blood from getting impaled on the machine turns the microbrew into Moe's most popular drink.

Example of:
Sheet of Glass