Not Using the "Z" Word 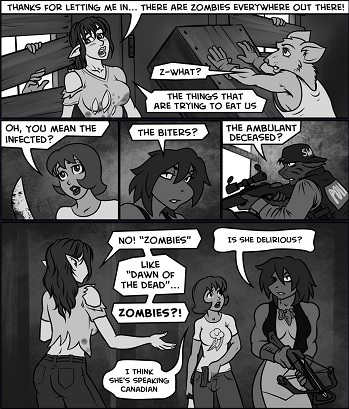 A story has creatures that are obviously based on some sort of mythological monster, but goes out of its way not to call them that.

The title comes from Shaun of the Dead, which gave this a Lampshade Hanging, as seen in the page quote: Shaun doesn't like it because it makes him nervous, but the real reason they're not supposed to say it is that they're in a zombie movie.

A subtrope of the Sci Fi Ghetto. Can be used to highlight how their monsters are different. Suppose your monsters are rotting shambling undead that want to drink your blood. Call them zombies and every casual reader's going to assume they're after "braaaaaiiinnss". Calling them vampires brings up images of old black-&-white horror movies, Anne Rice, and sparkles. When it's used to force a sense of "realism" (we don't call them "zombies" because zombies aren't real), it smacks painfully of Genre Blindness. If you were confronted by what appears to be a member of the walking dead, how much effort would you spend coming up with an alternative name? (After all, we know that hobbits are a fictional creation of J. R. R. Tolkien, but people were quick to nickname the extinct species Homo floresiensis

as "hobbits" due to their short stature and human likeness.)

If the reason why someone doesn't want to use the Z-word is not for semantics but because saying the word will bring bad luck, it's The Scottish Trope or Speak of the Devil. If it's because the Z-word is considered rude, it's Fantastic Slurs, or T-Word Euphemism. When used for non-fantastic things and attributes, it may be an attempt to show and not tell.