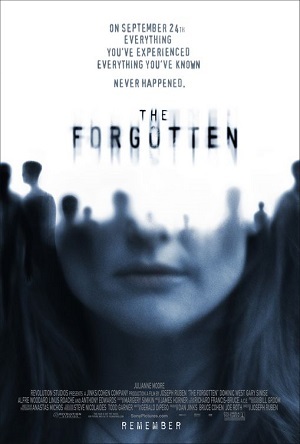 The Forgotten is a 2004 Suspense/Thriller by Joseph Ruben and starring Julianne Moore, Dominic West, Alfre Woodard, Linus Roache, and Gary Sinise. Told that her child, Sam, never existed, Telly Paretta finds physical evidence of Sam's existence and tries desperately to find someone to believe her, helped by Ash Correll, another parent who had apparently lost his daughter. As she unravels the mystery she discovers greater forces at work.

Not related to the 2017 Korean thriller Forgotten.

It exhibits the following tropes: