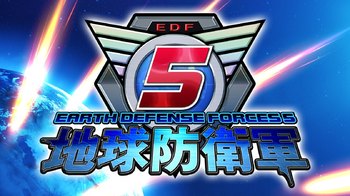 EDF 5 is set in 2022 and is a reboot of the story occurring before 2025, taking place during the first alien invasion of Earth. Like in most of the previous titles, the game is a casual Third-Person Shooter where the players battle hordes of enemies in various stages with a large and sometimes crazy collection of weapons and equipment.

The game re-uses various assets developed for Earth Defense Force 2025 and its updated title Earth Defense 4.1 "Shadow of New Despair", but also introduces several new elements to the game. It also borrows old enemies from previous titles and updates them for this installment.

Players will recognize various enemies seen in the titles just prior to this game such as ants, spiders, and even the massive Kaiju style enemy Erginus. New enemies have been added such as giant frogs with guns tentatively called "Colonists", giant armored gun wielding infantry that looks like the "Greys" type aliens tentatively called "Cosmonauts", new Kaiju style monsters, new bugs, and even some enemies from older titles such as the flying saucer ships.

The game has been made bloodier and gorier with the addition of new location damage mechanics for various enemies, new gibbing mechanics, damage textures for enemies, blood splat textures, and even the ability to shoot off limbs of the giant humanoid enemies.

While the overall base game mechanics remain the same, several new mechanics including changes to characters have been introduced. Overall the four classes in the previous titles have made a return for this title. The game will feature the Ranger, Palewing(In Japan)/Wing Diver, Air Raider, and the Fencer characters. The game starts off the protagonist as a civilian or new volunteer and then after a Time Skip, switch gear to a military looking EDF skin. They can also equip various special abilities, equipment, and items that affect gameplay.

The game was released for the PS4 in Japan, the US, and Europe. In July 2019, the game was also released on Steam for Windows.

The game is followed by a sequel, Earth Defense Force 6, which is scheduled to be released in 2022.

The EDF's forces will defend the people of Earth with these tropes!