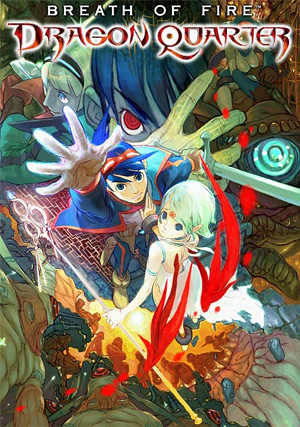 Breath of Fire: Dragon Quarter is the fifth entry in the Breath of Fire series, released for the Playstation 2 in 2003 to generally positive reviews. It's a considerable departure from the previous entries, which were much more traditional eastern RPGs.

Sometime in the future, humanity lives deep Beneath the Earth centuries after an apocalyptic disaster rendered the surface a barren and inhospitable wasteland. However, the world below is just as miserable, with the poor toiling away in the polluted lower levels while the rich enjoy the relative cleanliness and luxury of the higher levels. Every citizen is assigned a number called a "D-Ratio" at birth that determines one's lifelong place in society, with the highest (1/4) being the titular "Dragon Quarter".

Ryu is a lower-level citizen who happens across a young mute girl named Nina with a pair of artificial wings grafted to her back. Discovering that the polluted air of the lower levels is slowly killing her, he resolves to rebel against the government and take her to the surface where there is hopefully clean air. But Ryu's quest takes an unexpected twist when he accidentally fuses with a mysterious dragon, gaining the power to transform into an obscenely-powerful draconic hybrid but at the cost of his own lifespan.

Joining Ryu and Nina is Lin, a member of La Résistance who wishes to topple the D-Ratio system and expose the secrets held by the six shadowy rulers of the underground world. But chasing them down is Bosch, a high-ranked aristocrat and Ryu's former team-mate, whose pursuit of the trio quickly becomes very personal.

Dragon Quarter's most interesting gameplay mechanic is the SOL (Scenario Overlay) system. Among other things, this allows you to perform a "SOL Restart" whenever you get overwhelmed. This is a kind of New Game+ which doesn't require beating the game to take advantage of. This mechanic actually encourages you to start over; rather than starting from scratch, giving up and SOL Restarting allows you to retain all your equipment, combat skills, and any experience that hasn't already been allocated (the game features "Party XP" in addition to regular experience points, which you can allot as you like). The relatively short length of the game (about 10 hours, give or take, for a complete run) further facilitates this. Depending on how far you went on your last run, you'll see new cutscenes that reveal previously hidden details. Though the plot makes perfect sense without them, they are important for a deeper and more nuanced understanding of the story. In addition, beating the game increases your D-ratio for subsequent attempts, with the D-ratio rising each time you clear the game, though for story purposes, you are always considered a "low-D". This allows you to open previously inaccessible new areas, and even gain access to better equipment that might be found in them.

Making this more relevant is the D-Counter, a timer that starts when Ryu bonds with his dragon, and which is constantly counting down to his eventual death, speeding up dramatically if he uses any of his utterly broken draconic powers. While you are allowed to suspend your game through quicksaves, permanent save files could only be created through the use of rare save tokens, giving the game an extra layer of Nintendo Hard difficulty. In addition, if Ryu dies due to his counter maxing out, there is no SOL Restart option offered; you must simply start the game over from scratch.