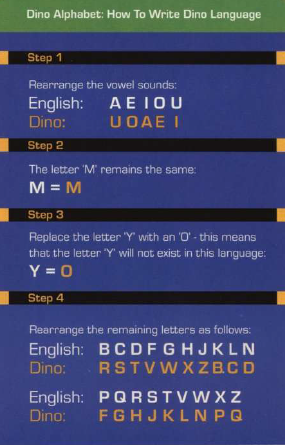 The writers need a new language, except they don't want to actually come up with a new language from scratch; that simply takes too much time and work, especially for something that rarely ends up being relevant once the Translator Microbes start kicking in. One solution is to make the "new" language a cipher of English — usually, a substitution cipher

— with the same words, grammar and all. Typically, an entirely new 26-letter alphabet is invented, but occasionally "cryptogram"-style ciphers are used, as in Final Fantasy X and The Order of the Stick.

Works from non-English-speaking countries may do the same with their own language or alphabet, but not always. Games and movies may feature amusing Easter Eggs, Back Story details or Foreshadowing of future plot events written in this language for those who are nerd enough to memorize the ciphertext rules, as a sort of Bilingual Bonus. Frequently, people make these fonts available for download to use as actual fonts when typing.

See also Wingdinglish and The Backwards Я. When writers take it even further and start creating new lexicons, syntax, and grammar, on into a full-blown original language, you get the supertrope Conlang.