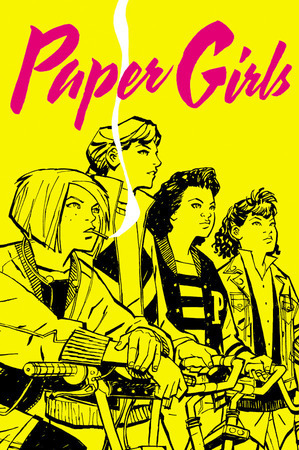 From left to right: Mac, KJ, Tiffany, and Erin
Advertisement:

Paper Girls was a 30-issue (October 2015 to July 2019) creator-owned Image Comics series written by Brian K. Vaughan and illustrated by Cliff Chiang. Early on the morning of All Saint's Day 1988,note That's the day after Halloween, for any non-Catholics out there. 12 year old Erin Tieng goes on her normal newspaper delivery route in a Cleveland suburb only to be menaced — and then rescued — from some teenage boys with dubious intentions by a trio of other paper girls who have banded together for mutual protection from any lingering Halloween craziness. That's when things start to get strange.

In July 2019, it was announced that Amazon was developing a series adaptation for Prime Video; Vaughan will be co-producing with Stephany Folsom (Toy Story 4), who has also been tapped to write.