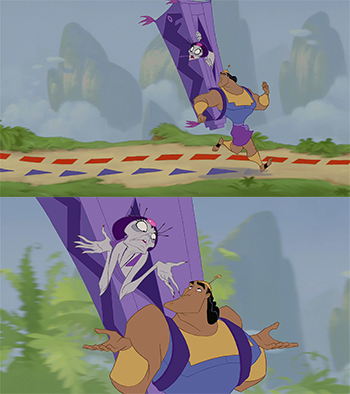 Oh well, back to business.
A character is given a revelation, or sees/hears something, that is shocking, insulting, disturbing, outlandish, or just plain dumb. They begin to react accordingly... but then just shrug it off and go about their business. Always Played for Laughs.
Advertisement:

If the character simply does not react at all, you have The Stoic or someone that has Seen It All. If the character shows a downplayed reaction that almost shrugs it off, it's Dull Surprise. It could be a Milholland Relationship Moment.

Alternatively, the character might see or hear something unusual, but will ultimately dismiss it as "just my imagination" or be subject to the Bystander Syndrome. See Also No More for Me.

Mario does a shrug take after getting cornered by enemies for a mandatory battle.

Mario does a shrug take after getting cornered by enemies for a mandatory battle.