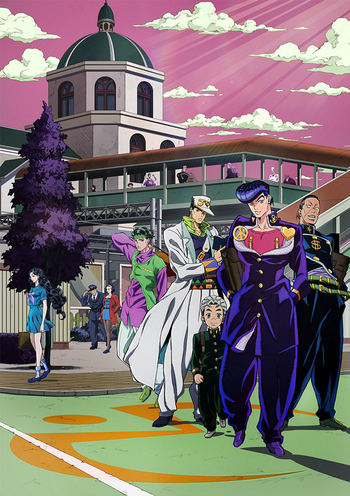 This is great!
"Humans thrive on the destruction of others. But among them, there's you, and your power is the kindest, most generous ability one could ever have."
— Jotaro Kujo
Advertisement:

Diamond is Unbreakablenote also known as "Diamond is not Crash", a common mistranslation that appeared on Japanese merchandise until 2013 (ダイヤモンドは砕けない) is the fourth part of the long-running JoJo's Bizarre Adventure saga. It is preceded by Stardust Crusaders and followed by Golden Wind. It ran on Shonen Jump between 1992 and 1995. Hirohiko Araki still considers Diamond is Unbreakable his Magnum Opus today, even compared to all the parts of JoJo written both before and after it.

Set in 1999, this Part stars the friendly, confident high school student Josuke Higashikata, the product of an extramarital affair between Joseph Joestar and a Japanese college student. Jotaro Kujo travels to the northeastern Japanese town of Morioh to track down Josuke in order to sort out his placement in the aging Joseph's will, as well as warn him of a dangerous Stand user Joseph foretold. After encountering this Stand user, Jotaro and Josuke learn that he obtained his Stand as the result of being struck with an ancient arrow fired from a bow used by a local high school student. Jotaro stays in town to find the bow and arrow, believed to be the source of the Joestar family's Stands, while Josuke encounters multiple Stand users created as a result of the arrow, including classmates Koichi Hirose and Okuyasu Nijimura and local famous manga author Rohan Kishibe.

After the bow and arrow is retrieved, and Josuke reunited with his father, the group learns from the earthbound ghost of a murder victim that there is a Stand-using serial killer loose in town. Josuke and his friends must find the murderer, Yoshikage Kira, before his murder spree continues, thwarted by several other Stand users created by a second bow and arrow.

An anime adaptation aired from April to December 2016, spanning 39 episodes. An OVA of episode 5 of its spin-off, Thus Spoke Rohan Kishibe, is a bonus for those who buy the entire DVD set for Part 4. A live action film directed by Takashi Miike and starring Kento Yamazaki was released in 2017 to coincide with the franchise's 30th Anniversary. The English dub of the anime adaptation aired on Toonami on August 18, 2018.

open/close all folders
Tropes # to B
Tropes C to E
Tropes F to O
Tropes P to Z
Yeah, but first... Question: Can you repeat what you just said about my stinger, sir?!
Feedback

Even though he's the starter villain of part 4, Anjuro is quite easily one of the most disgusting villains the Jojoverse has to offer.

Even though he's the starter villain of part 4, Anjuro is quite easily one of the most disgusting villains the Jojoverse has to offer.