Spoilers Off applies to all "Moments" pages, so all spoilers are unmarked!! 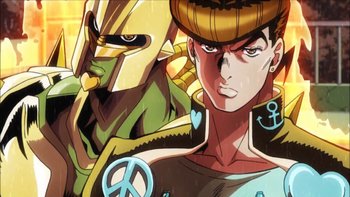 "Here you'll remain for all eternity; in the town my grandpa loved."
"Man, I feel so invigorated! I feel like it's the early hours of New Year's Day, and I just put on a fresh pair of my favorite underwear!"
— Josuke Higashikata after giving Yuya Fungami the beatdown of a lifetime.
Advertisement: