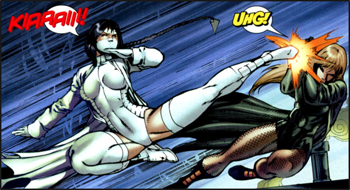 The kiai is a technique that involves shouting, grunting or screaming while posing or fighting to audibly demonstrate your bone-crushing power. Often associated with Martial Arts Movies and anime, this has its basis in many real-life martial arts (and thus is Truth in Television).

Kiai (Japanese for "unification of will", and pronounced like the words "key" and "eye" in rapid succession) mainly refers to focus or intensity in its original language. Its secondary definition of respiration has been appropriated in English as the shout that accompanies focused moments in kata (martial arts moves). When Japanese characters actually bring up kiai, this can throw off translations. Especially in supernatural martial arts.

In some teachings, it is believed that the shout 'releases' your inner energy and allows you to use more force behind your blows. In reality strikes synchronized with exhalation are the strongest regardless of sound as it helps in activating the abdominal and core muscles, it's just that the kiai encourages proper breathing during a strike.

Wuxia being wuxia and Anime being anime, however, these kinds of real-life shouts are generally exaggerated into two main forms:

It's commonly seen in martial-arts films, anime, and really, anybody who's Hot-Blooded and kicking ass.

See also Screaming Warrior, as well as Funny Bruce Lee Noises. Also see Make Me Wanna Shout if a Kiai is weaponized. May overlap with Calling Your Attacks.

Also via Bilingual Bonus, if read in pinyin, it'd be said as "qihe" (chi-huh).