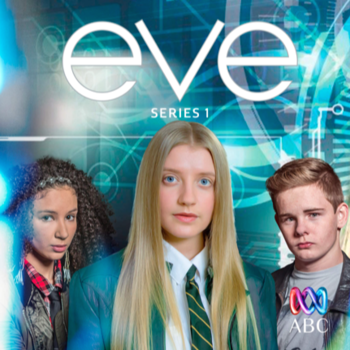 From left to right: Lily, Eve and Will
"My name is Eve. I have four protocols. Survive. Learn. Adapt. Evolve."
—Eve
Advertisement:

Eve is a Science Fiction show that airs on CBBC (UK) and ABC (Australia).

Will Clarke discovers his father has been instructed to destroy "Project Eternity" to prevent the technology being used for military purposes. When he learns that that the first test subject is a realistic android, he decides that it's inhumane to treat her as a machine to be decommissioned and decides to activate her instead.

Now that Eve has been activated, Will and his father have no choice but to take her home and pretend she is his "cousin from America", in order to keep the local corporate weapons designer and anyone else who might misuse the technology from learning the truth about her.

Not to be confused with the 2003 sitcom Eve starring American rapper and presenter Eve.