Film / Women of the Prehistoric Planet 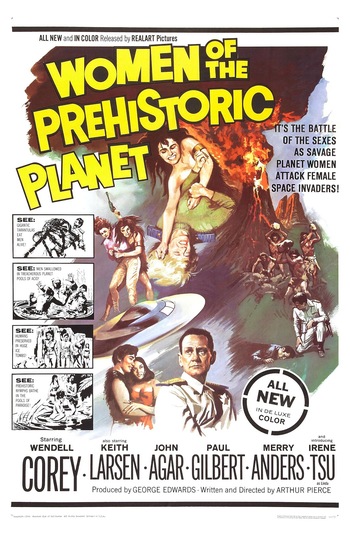 A convoy of human spaceships are returning to their homeworld after a long mission; the mostly Caucasian crew is supplemented with "Centaurans", Human Aliens played by Asian actors and with a fittingly tense backstory of racial-slash-imperialistic tension. The tension comes to a head when one ship in the convoy is hijacked by some of the Centaurans aboard and crash-lands on the third planet of a distant solar system, killing most of the crew. Nevertheless, the admiral commanding the convoy disobeys orders and turns back to rescue any survivors of the lost ship.

Because of Time Dilation, the rescue ship arrives some 20 years after the original ship crashed (local time). The crew begins searching the site for any clues to what might have happened, with many falling prey to the dangers of the jungle planet in the process. Meanwhile, one of the Centaurian crew, a girl named Linda, meets Tang, a young man of Centaurian descent and falls in love with him, while discovering another part of the story of the lost ship.

The third planet from the sun will be known as... Earth.