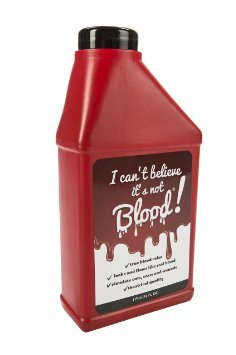 Punningly named after a street in London, this is a name for fake blood, especially the sticky, edible sort in old British horror films. Everything2 gives the recipe as:

The blood is sticky, thick, and bright red (crimson in fact). The original Kensington Gore was a specific brand of proprietary stage blood manufactured by retired pharmacist John Tynegate in the '60s and '70s. It can be seen in a lot of old horror films, especially the Hammer Horror series.

Plain chocolate syrup is still used in black and white films as brown looks more like blood than red would in monochrome and better matches the viscosity of real-world blood.