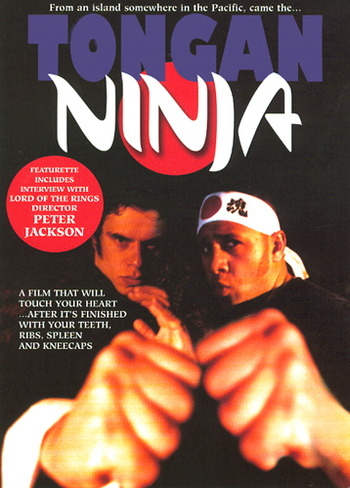 Tongan Ninja is a 2002 martial arts/musical parody, co-written by and starring Jemaine Clement of Flight of the Conchords fame. It's plot is loosely based on the 1972 Bruce Lee movie Way of the Dragon, and along the way it playfully spoofs just about every martial arts trope in existence.
Advertisement:

The story begins when a young boy named Sione (Sam Manu) survives a plane crash and finds himself stranded on an uncharted pacific island. After seeing his father tragically eaten by fish, the boy was trained by the locals in the art of Ninjitsu and grew to become the most dangerous ninja alive. Upon learning that the peaceful owners of a New Zealand eatery have been targeted by Mr. Big's "So-Called-Syndicate", Sione's wise old mentor Mr. Magasaki sends him to combat this terrifying threat. The Tongan Ninja must work his way through a host of formidable foes, including Knife Man ("he's good with knives!"), Gun Man ("he's good with guns!") and Hench Man ("he's good with...henches.") before battling the dreaded - and very hairy - Action Fighter (aka Marvin), his childhood nemesis and all-round jerkass, who turns out to be the long-lost son of crime-boss Mr. Big.