Film / Way of the Dragon 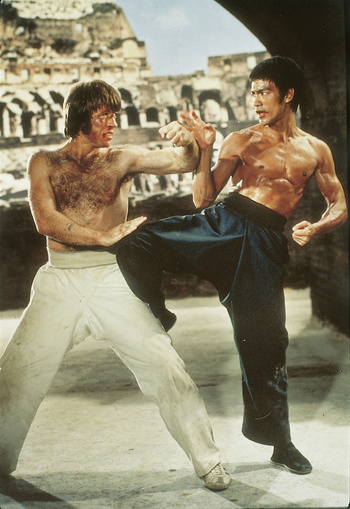 Way of the Dragon (traditional Chinese: 猛龍過江; literally, "The Fierce Dragon Crosses the River"; also known as Return of the Dragon in the United States) is the third film to feature Bruce Lee.

Tang Lung (Lee) is sent from Hong Kong to Rome to help his friend's niece Chen Ching Hua. She and family friends operate a Chinese restaurant which the local mafia wants to own. In order to force them to sell, the mafia has been trying to bankrupt them by having mooks frighten away any prospective customers. They then scarper before the police arrive. Lung is a Fish out of Water, speaking no English or Italian. This leads to some humorous moments prior to him engaging the mob, such as accidentally ordering five bowls of soup at an airport cafe and mistaking a prostitute's advances for mere friendly gestures (this is probably the most humorous of Bruce Lee's films, possessing an almost Jackie Chan-like feel during its first quarter or so). Chen, initially, is irritated by his cultural incompetence and doesn't trust him, but later comes around to him. After Lung and the restaurant staff beat up the first batch of mooks, the mob boss pays a visit with a bigger batch of mooks. When Lung beats up these as well, the mob boss calls in some of the top fighters in the world. This leads to what some consider one of the greatest moments of martial arts cinema, as Bruce Lee dukes it out with Chuck Norris at the Colosseum.

Did we mention that Bruce Lee pwned Chuck Norris?

Alternative Title(s): Return Of The Dragon