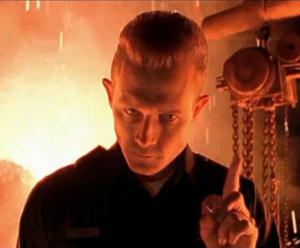 That was naughty, Sarah.
Kimmi: Don't wave your finger in my face!
Alicia: I will always wave my finger in your face!
— Survivor: The Australian Outback
Advertisement:

A common Take That! gesture where someone lifts their hand, and wags their index finger, sometimes with a "tsk tsk tsk" clicking of the tongue or an "ah, ah, ah". The gesture is usually to say "No", "No you don't", or, when accompanied by a Villainous Smirk, "Nice try, sucker." The latter often occurs when a character thinks they have their adversary dead to rights, and they have an easy path to victory - unfortunately, it doesn't work, whether they run out of ammo, or the "victim" anticipated the attack.

The Finger Wag is sometimes followed by a comeuppance of the wagger, when they've actually been defeated and just don't know it yet. Alternatively, it's often followed by a Bring It.

Not to be confused with Flipping the Bird, or Giving Someone the Pointer Finger. The Declarative Finger can also sometimes be used in these situations. Contrast Bring It.

Sonic wags his finger on the title screen.

Sonic wags his finger on the title screen.