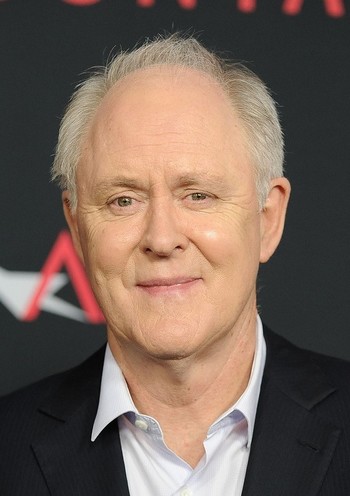 "Up there with my awards, I have a great big statue of Groucho Marx, just to put everything in perspective."
—John Lithgow
Advertisement:

A dorm room housemate of Al Gore and Tommy Lee Jones at Harvard in the mid-1960s, Lithgow's career has taken many odd turns with a variety of roles. Following his career on stage, where he twice won a Tony, he successfully moved into film with a number of versatile roles, the best-known of which are Roberta Muldoon in The World According to Garp, Reverend Shaw Moore in Footloose, Sam Burns in Terms of Endearment, and George Henderson in the family classic Harry and the Hendersons. He had a tendency to play villains, such as assassin Burke in Blow Out, Cain in Raising Cain, Earl Talbot Blake in the Denzel Washington crime thriller Ricochet, Eric Qualen in the Sylvester Stallone vehicle Cliffhanger, and Large Ham Doctor Emilio Lizardo/Lord John Whorfin in The Adventures of Buckaroo Banzai Across the 8th Dimension. His more recent films include Rise of the Planet of the Apes, Interstellar, and Pet Sematary (2019).

In 1996, Lithgow moved onto the small screen, playing lead character Dick Solomon in the oddball sci-fi sitcom 3rd Rock from the Sun. The show ran until 2001 and earned him three of his five Emmys. He's also lent his voice to audiobooks, dramatic readings, and animated movies, such as the ridiculously popular Shrek franchise in which he played the villain Lord Farquaad. Not to mention playing Yoda in NPR's radio dramatizations of The Empire Strikes Back and Return of the Jedi.

Lithgow joined Dexter for its fourth season, playing Arthur Mitchell AKA The Trinity Killer. His complex, layered, and downright terrifying portrayal was met with widespread critical acclaim and a Golden Globe Award for the Best Supporting Actor and another Emmy. He also has had a career on Broadway, most recently as real-life Agent Peacock Joseph Alsop in The Columnist. He occasionally appeared as Jerry Whitaker on How I Met Your Mother. He also played Winston Churchill in Netflix's The Crown (2016) which earned him several awards.

He happens to be one of the nicest people anyone could hope to meet, with fellow actors and colleagues saying how much of a pleasure it is to work with him. He's also a talented children's entertainer, having authored many children's books and music CDs for children. Recently, he published an autobiographical account of his life in theater, which he titled Drama: An Actor's Education.